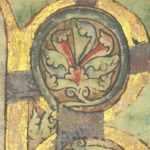 Initial in a medieval manuscript (MS 116)

The library of St. Mary’s Abbey at Heilsbronn is one of the few almost completely preserved monastery libraries, which shaped the intellectual life in the Franconian region for centuries and, after secularisation, still served as a princely school for the junior civil servants of the Hohenzollern margraviates of Bayreuth and Ansbach.

The Cistercian monastery in Heilsbronn, founded in 1132, developed over time into one of the most important monasteries in Franconia, an important centre of Cistercian mysticism. After the dissolution of the monastery in 1578, the holdings of the monastery library were used by the Heilsbronn grammar school, the so-called Fürstenschule, founded in 1581, until 1736 and then divided between the margraviate of Brandenburg-Ansbach and Brandenburg-Bayreuth. A few years later Margrave Friedrich von Bayreuth founded the University of Erlangen in 1743 and donated his part of the Heilsbronn library to it in 1748. In 1769 the Margraviate of Bayreuth became part of the Margraviate of Ansbach, and in 1770 Margrave Alexander von Ansbach ordered the Ansbach half of the Heilsbronn book treasure to be transported to Erlangen.

Within the framework of the German Research Foundation (DFG) call for proposals “Digitisation of medieval manuscripts”, all manuscripts of the former Cistercian St. Mary’s Abbey in Heilsbronn will be digitised in several sub-projects over the next few years.